Rejoice-what was lost is found!

Okay, I admit it....I'm getting old. Usually we say that so someone nearby will reassure us that we aren't that old but this time there's no reassurance possible! As often happens because Dan needs to go to church early, we were in separate cars today so after the birthday party I stopped to get gas. So far, so good. However a few hours later this afternoon when I went to get something from my wallet, I discovered it was gone!!! We searched high and low and finally concluded that I must have dropped it at the service station getting into the car or something. Of course, that would mean that it'd be long gone and the nightmare of reporting credit cards and getting a new license and insurance cards, etc. would begin. As I prayed, Dan decided to stop by on his way to work just to check and HALLELUJAH...the wallet was behind the counter waiting for us to claim it. God bless the honest workers at the ARCO on Baxter Road! And yes, I am getting old and my mind going. The wallet had been left on the counter, not fallen out of my purse as suspected. OUCH!
Posted by Kluver's Korner at 7:41 PM No comments:

Hey, I wanted that! 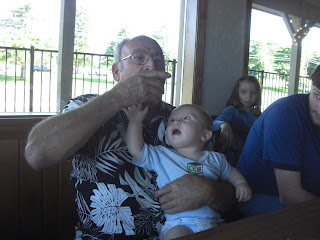 Michael couldn't quite figure out why the pizza was going in Pa's mouth and not his! I know, I should have taken a picture of that pizza (at Paddington's), right Karla? We were there to celebrate grandson Corbyn turning 12 this weekend. He and his dad went to the Beaver's game on his birthday so today was just a family time to celebrate and console the Beaver fans at the same time.
Posted by Kluver's Korner at 3:12 PM No comments:

Today I had a laser procedure to remove some scar tissue that was hampering my vision. It's amazing what technology can accomplish! After numbing and dialating the eye, the Dr. used a laser to blast away the unwanted scar tissue without even pucturing the outer eye! I was nervous so forgetting to breathe was the only real problem throughout the short ordeal. Now, except for a lingering headache, all is fine and my vision should improve in a day or two. :>) PTL!
Posted by Kluver's Korner at 6:42 PM No comments: